The Times Literary Supplement, June 6, 2018, carried a review of my anthology, Crossing Borders, Stories and Essays About Translation. See description at right.

My story, "Truthtelling," appears in the first issue of the new literary magazine, Speak, edited by Chandra Ganguly.

GOOD NEWS FOR FANS OF DISTURBANCES IN THE FIELD: The novel is now available as an audiobook from audible.com.

EXCITING AUDIO NEWS
Lynne and her husband, Harry, are the co-directors of a new audio project, Calliope Author Readings. Recordings of great American authors reading brief excerpts from their works are now available through their website, Calliopeauthorreadings.com. Writers include James Baldwin, Bernard Malamud, John Updike, Philip Roth, and others. A great opportunity to hear these writers' own interpretations of their works. The recordings were first made 50 years ago! And now they'll be available to a brand-new audience. Check out presentation of readings under Events.

Check NPR.org under Morning Edition, Susan Stamberg, to hear NPR's 3/7/14 interview with Lynne and Harry about how they began and revived Calliope Author Readings. Hear excerpts from Baldwin, Updike, and Roth, in their youth.

Lynne's poem, "Cement Backyard," from her recent collection, See You in the Dark, was chosen by former Poet Laureate Ted Kooser for the American Life in Poetry Series. Poems are widely syndicated in newspapers and read by 3 million readers around the world. Click on link above to read. 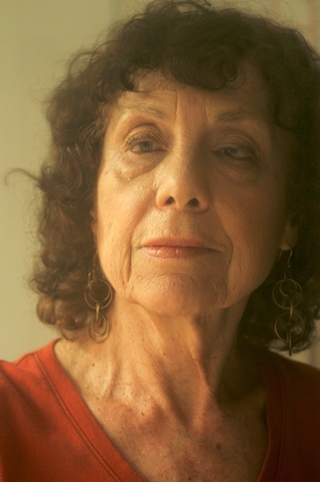 More good news.  My newest story collection, Truthtelling, will be coming out in October from Delphinium Books.  It's a departure from my previous collections since many of the stories twist reality into curious and fantastic shapes.  The book has already received rave reviews from Publisher's Weekly, which calls the author an "American literary treasure," and from Kirkus, which calls every story "perfect."  Here are the links: https://www.kirkusreviews.com/book-reviews/lynne-sharon-schwartz/truthtelling/

My latest translation from Italian,  Run for Your Life,by Silvana Gandolfi, is one of the four honorees for the American Library Association's Batchelder Award, given to books translated from another language into English.

The novel is based on an actual case in Sicily: a young boy is shot by the Mafia after he witnesses a murder. Full of suspense, the story shows how he is persuaded to testify, then placed in a witness protection program. Good for adults too!

Just released from Seven Stories Press: Crossing Borders, Stories and Essays About Translation, which Lynne edited. These wonderful stories, by renowned authors such as Lydia Davis, Joyce Carol Oates, Michelle Herman, and others, focus on the misunderstandings and difficulties encountered by translators, especially in the volatile situations of love and war. Also includes essays by poet Chana Bloch, on translating the Song of Songs; Michael Scammell, on translating Vladimir Nabokov; and Primo Levi, on being translated.

Lynne's third collection of poetry, No Way Out But Through, was published by the University of Pittsburgh Poetry Series. The new collection goes further than her previous two in exploring the realms of dream and of childhood, the ironies of daily life, and includes a section in memory of her late older sister. Critics have praised its technical graces, its range, and especially its wit.

Lynne's recent collection of essays, This Is Where We Came In, published by Counterpoint, ranges through her experience--from a darkly comic account of heart surgery, to African drum classes, to a wrenching account of childhood cruelty. Intimate glimpses into a much examined life.

Lynne Sharon Schwartz began writing at the age of seven, in her native Brooklyn, New York, and has been writing ever since. But she didn’t begin taking herself seriously as a writer until she was in her early thirties. Up until then she was occupied with attending Barnard College and graduate school at New York University, getting married, having two children, spending a year living in Rome, holding down editorial jobs and working at a fair housing program during the civil rights movement—though not necessarily in that order.

Finally she realized that if she was to fulfill her childhood dream of becoming a writer she had better send her work out into the world. So she dropped out of graduate school before completing her thesis, to devote herself to writing. She had always wanted to write in many genres, and has now published 19 books, including fiction, nonfiction, essays, poetry and translation. In the introduction to A Lynne Sharon Schwartz Reader, she writes, "I began writing... before I knew about the strictures of literary genres: poem, story, essay... What I wrote was... partaking of all the genres and bounded by none."

Ms. Schwartz began publishing her stories in the 1970’s; the first work that brought her wide attention was a Watergate satire published in The New Republic, called “The Tapes As Theater.”

Her first novel, Rough Strife, about the vicissitudes of a long marriage, was published in 1980 and was nominated for a National Book Award. In 1981, Balancing Acts, a novel about the friendship between an aging circus performer and an adolescent girl, appeared, and in 1983, the novel Disturbances in the Field, about a family tragedy, brought her critical acclaim. Two short story collections also appeared in the 1980’s, Acquainted With the Night and The Melting Pot and Other Subversive Stories. In 1985, after she lost her home in a fire in her apartment building owned by Columbia University, she wrote We Are Talking About Homes: A Great University Against Its Neighbors, a nonfiction book about Columbia’s housing policies as well as the effect of the fire on the families in the building.

Her third collection of stories, Referred Pain, appeared in 2004. The Writing on the Wall (2005), is set in New York City in the weeks following the September 11 attacks. It explores their impact on individual lives, as well as the inadequacy of the public language used in its wake by the government and the media. Her latest novel, Two-Part Inventions (2012) tells a story of ambition and deception set in the world of classical music; the protagonist is a pianist and her story is based on actual events in the life of a British pianist.

Ms. Schwartz is also a translator from Italian. Her translations include A Place to Live and Other Selected Essays by Natalia Ginzburg, and Smoke Over Birkenau, by Liana Millu, a memoir of a survivor of Birkenau.

Lynne Sharon Schwartz’s reviews and criticism have appeared in many leading magazines and papers. She has received grants from the Guggenheim Foundation, the National Endowment for the Arts, and the New York State Foundation for the Arts, and has taught in many writing programs here and abroad. She is presently on the faculty of the Bennington Writing Seminars.