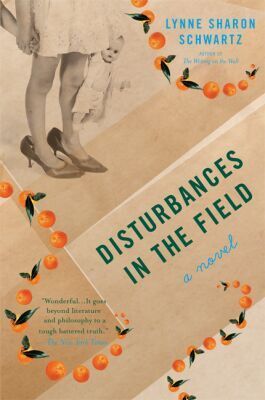 Disturbances in the Field

Now available as an audiobook from audible.com.

Disturbances in the Field, acclaimed when it first appeared in 1983, has just been reissued in paperback by Counterpoint.

When she was a girl, Lydia Rowe spent an idyllic month with her family in a house on Cape Cod. As with Proust and Combray, Lydia’s memories of the brown house by the sea became her talisman of the harmonious life. At college, she comes to feel the same way about studying Greek philosophy with her close friends—precise Nina, aristocratic Gaby, earthy Esther, and her first lover, George. The young women form a circle of intimacy and unity, a quasi family that will endure over the next twenty years.

Lydia becomes the pianist in a chamber music group, another kind of family. She marries Victor, an artist, and though their early years together are turbulent, they have four children and finally achieve something of the order and balance of the classical trios she loves to play, the coherence amid diversity that has been her goal since reading the pre-Socratic philosophers in college. Then a tragic event turns Lydia’s life into a field of dissonance and pain.

The stoic Epictetus wrote, "everything has two handles, one by which is may be borne, the other by which it may not." Lydia grasps the wrong handle and grows numb to herself and those she loves. Though she feels stripped and vacant, her inner voice remains, doing its implacable work of observing, remembering, connecting, persistently limning the shape of her sorrow. What is the right handle by which her loss and her broken faith may be borne? How can Lydia reach a place where "ordinary things... resume their rightful proportions and places in a university of ordinary things"?

Nancy Pearl of Seattle NPR writes: "I am so pleased that Lynne Sharon Schwartz’s moving... novel is finally back in print... It’s a timeless meditation on love, marriage, motherhood, and loss, and the possibilities of the consolation of philosophy. As we’re plunged into Lydia Rowe’s life, from college through middle-age, it’s impossible not to look at the choices we’ve made, and the results that flowed from those decisions, in a new light. If you’re looking for a beautifully written, intelligent novel filled with three-dimensional characters whose pleasures and pains are familiar to all of us... don’t miss Schwartz’s book."

"The triumph of Disturbances in the Field is that it faces the most relentless loss without sacrificing its humanity... Schwartz never forgets the exuberance at the heart of poignanty."

"Not so much a story... as the execution of an entire unique world out of a generous accumulation of detail, character and incident."

"At a time when we are continuously drenched with trash and hype that threaten to drown us, Disturbances in the Field seems a more-than-welcome return to a classic idea of the novel... A wonder to read... I can think of no other contemporary writer who writes so well, with such rich sensuality."

"The book has the architecture of a sonata."

"I have not been so wholly taken into an aura, a field, since I began being hypnotized by Dostoevski and Tolstoy and George Eliot... I want to praise this book in every possible way."